5 Points on Investing in Palladium coins and bars 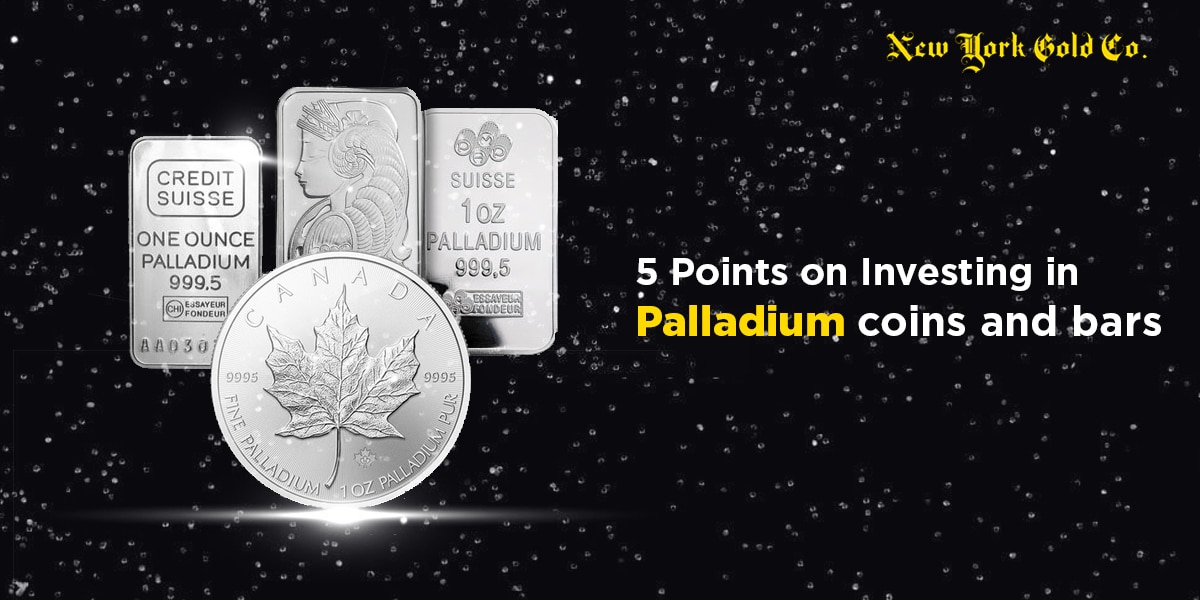 The allure of palladium

Palladium is a white metal that is used extensively in electronics, gold alloys, or as the primary metal in some cases. It is largely used in the automotive industry in the manufacture of catalytic converters that help in reducing harmful emissions produced by petrol-fueled car engines. Each unit uses around 3-7 grams of palladium and accounts for about 86% of mined palladium. 40% of the palladium is mined in South Africa, 44% in Russia, and the rest from USA and Canada. There are major supply constraints on the metal due to its dwindling reserves, labor unrest, and geopolitical conflicts. Due to its rising demand in the face of falling supply, the price of palladium is only increasing. However, palladium’s huge demand is mainly reliant on the overall global economy as a healthy economy produces lots of cars. If the market is suffering, then car production will be smaller and palladium prices are likely to fall.

Palladium prices are largely dependent on global economic events. The key driver of the palladium price forecast in 2022 will remain the car industry’s supply chain issue. During the pandemic, the automobile industry took a hit, and until car, production returns to pre-pandemic levels at a sustained pace. Currently. The palladium prices are low and due to the supply pressure, the prices are depressed. This is a good buying opportunity for investors. The push for and rise in the adoption of electric vehicles also poses a long-term risk for palladium, as these vehicles do not need catalytic converters.

Palladium presents an unconventional investment avenue that can pay rich dividends in the long term as it is among the rarest of rare precious metals traded in the commodity market. Physical metals are a good investment option and holding some of your wealth in the form of tangible assets such as palladium bars can add to long-term wealth growth and sustenance. Why is gold a different investment than cryptocurrency Understanding Why Precious Metals Are Undervalued The Top 10 Reasons For Investing in Platinum $1,864.93
With 33 years of service to our name, we are your trusted source for buying and selling Gold / Silver Bars and Coins. Buy any denomination with confidence!
Read More

Why is gold a different investment than cryptocurrency

Understanding Why Precious Metals Are Undervalued

The Top 10 Reasons For Investing in Platinum